The town of Toledo is located in the center of the country, 71 km from Madrid. Over 83,000 residents live in Toledo.

Toledo is one of the most important centers of European medieval history. It had been the capital of Spain from the Gothic epoch until 1560, when Madrid became the new capital. Nowadays, Toledo kept its image of a medieval city sheltered by city walls and fortified towers, once we cross through its gates we can access its impressive historic quarter. When it comes to culture, Toledo has many interesting places and can be found on the list of World Heritage Sites since 1986. Many artists resided in Toledo and some were born there, these include Garcilaso de la Vega and El Greco.

Among its many monuments, we can appreciate the impressive Alcázar, the Primada Cathedral, the monastery of San Juan de los Reyes, Cristo de la Luz Mosque, Bridge of San Martin. As well as corners of great beauty and history as the Roman baths o the Mirador del Valle. 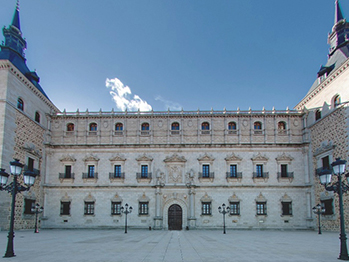 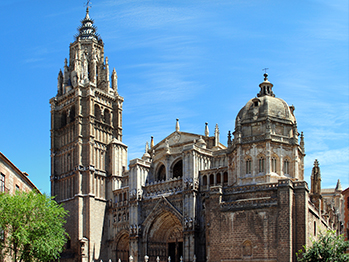 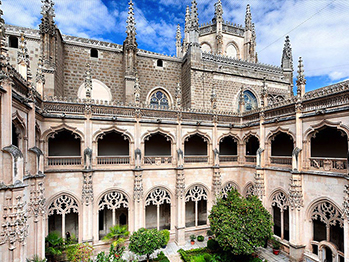 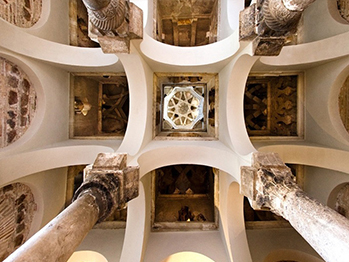 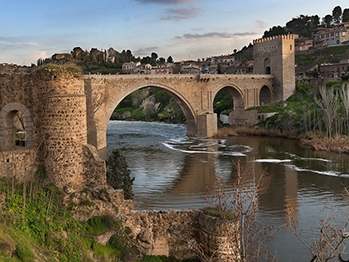 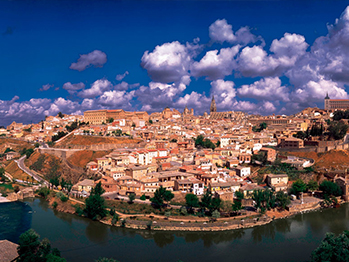 The Alcázar of 548 meters. The construction of the current building was ordered by Charles V, and the previous building was destroyed. It had several uses, such as the Crown prison, military barracks for Spanish and foreign armies, and silk workshops, before housing the Spanish Infantry Academy.

• La Primada Cathedral, since 1088 the main church of Toledo has been recognised as the primate cathedral. The aerial view you get from the top of Toledo’s towers is unforgettable, and you will be able to see the roofs of the cathedral forming a perfect cross.

• Monastery of San Juan de los Reyes. The church was built to hold the “dynastic mausoleum” of Queen Isabella the Catholic. The convent was practically destroyed during the War of Independence and was only partly rebuilt, while the second cloister disappeared, in accordance with the historical references from the XIX Century, leaving no distinction between the old and the restored parts.

Cristo de la Luz Mosque. Erected in 999 by the architect Musa ibn Alí, according to an inscription in Kufic symbols on the main facade. It is the most important example of Islamic art in Toledo because it remained completely intact from the time it has been built. In the XII Century, a Roman-Mudejar sanctuary was built, forming a semi-circular apse, decorated on the inside with Roman frescoes to adapt it to Christian worship.

Bridge of San Martin. A bridge located to the West of the city, it was built in the middle of the XIV Century, replacing an earlier bridge which had been used for boats. However, it was destroyed during the war between the brothers Pedro I and Enrique II. The interior tower is very misshapen after additions and later renovations during the reign of Carlos II, while the exterior still has its ribbed vaulting and peacock and horseshoe arches. It was declared a National Monument in 1921.

Roman Baths: Discovered in 1986, the archaeological remains at the site show the impressive buildings and monuments of the city of Toledo during the Roman times; designed and built with the latest Roman Urban development models at the time and with a clear influence of the capital of the Roman empire: the city of Rome.

Mirador del Valle: At the top of the valley over the river Tagus we find a scenic lookout where we can enjoy the traditional views the Toledo town, as it is often portrayed.

The Ribeira Square is a historical square in Porto, Portugal. It is included in the historical centre of the city, designated World Heritage by UNESCO.

The Ribeira district spreads alongside the Douro river and used to be a centre of intense commercial and manufacturing activity since the Middle Ages. Also since that time the Ribeira Square was the site of many shops that sold fish, bread, meat and other goods. In 1491 the buildings around the square were destroyed in a fire, and the houses were rebuilt with arcades in their groundfloors.

In the mid-18th century the city needed new urban improvements to provide for the swift flow of goods and people between the Ribeira neighbourhood and other areas of Porto. The square was to become enclosed on its north, west and east sides by buildings with arcades, while the south side of the square, facing the Douro, was enclosed by the mediaeval walls (Muralhas Fernandinas) of Porto. These walls were torned down in 1821, opening the square to the river. Location 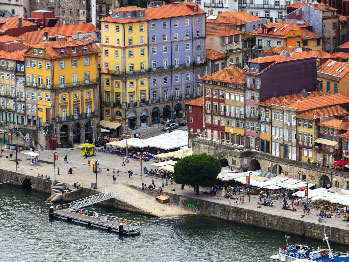 The Dom Luís I Bridge

The Dom Luís I Bridge is a double-decked metal arch bridge that spans the Douro River between the cities of Porto and Vila Nova de Gaia in Portugal. At the time of construction its span of 172 m was the longest of its type in the world.

The government held a competition for the construction of a metallic bridge over the Douro River on a site that was adjacent to an existing bridge that it would replace. Théophile Seyrig had engineered the D. Maria Pia Bridge project nearby, whilst working as a partner of Gustave Eiffel. He now took sole responsibility for the new, major Luís I Bridge. The construction was begun in 1881 and the bridge opened on 31 October 1886 (the upper deck; the lower deck opened in 1887). Location 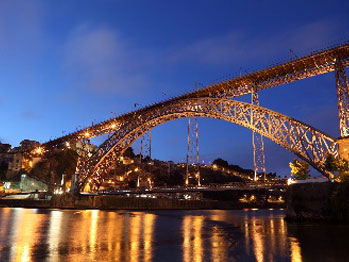